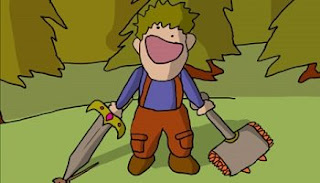 The BFD of today was just one piece from the idiot infestation of Azeroth. There are hoards of people who are unaware of the basic mechanics of the game, don't know the skills of their class, have funny talents and actually don't even know which talent does what, pull aggro all the time, run out of mana and die in the fire on the ground.

It has nothing to do with casualness. Casuals may don't know the end-game bosses, but someone who don't know the mechanics of a system he dedicates even just 1-2 hours a week is an idiot. After all, all spells and talents has tooltips, and figuring out that if you hit something it will try to hit back is just common sense.

Low levels are not the only places where these quilboar-minded beings crawl. Wowjutsu tracks 107K guilds. 99% of them did Kara, so we are not talking about twink, leveling and RP guilds, but people who want to raid. 9.7% of them killed Lady Vashj. 7.4% killed Kael'Thas. Repeat, poor Mrs naga and Mr crazy elf, not Illidan or Archimond (who were also firstkilled a year ago)! These sorry bosses drop T5. Anyone needs their loot at all? Everyone outgeared them in their badge items!

Nalorakk: 50%. You know, that funny bear-guy who has no strong AoE, no MC, no long CC, nothing except 15 mins bonus to your bear-run. Tank and spank.
Akil'zon: Run in, run out, has nature res aspect/totem on. Is that too much to ask? For 57% of the guilds: yes.
Jan'alai: Don't stand into the big balls of fire! Even a 10 year old can do that! Apparently 66% of the guilds don't.
But my personal favorite: Nightbane. No, he is still in Karazhan, he is not the new ZA endboss. But for 1/3-d of the guilds this poor dragon never hit the ground.

There are 2 questions left:
The first question can be easily answered by a goblin mind: profit. The Blizzard Entertainment has income from subscribers. Not raiders, not players, subscribers. The money of the member of the SK Gaming is not better than the money of Donald. But to keep them and get more of them, the game must-be retard-friendly. If there would be any challenge in the game these retards would leave. So Blizzard implemented several features to make sure that no one who is intelligent enough to enter his credit card number choose to leave the game because it's "too hard"
While Blizzard makes interesting and challenging raids for capable players, most of Azeroth and Outland are foolproof. It's not a bug, it's a feature. Money makes the world go round and Blizzard needs the money of the retards.

What can you do? On the large scale: nothing. You cannot make the game more challenging by whining on the forums, so stop it. Blizzard would only stop nerfing if more people would leave because of "too easy" than because of "too hard". But where would you go? All other MMO-s are plagued by the same problem. Unless some rich idealist (= non existing since no idealist will ever get rich), make a game without the wish for profit, all MMO creators are forced to nerf their game to the needs of the mindless masses. So you can stop playing MMO and play only chess with your friends or you can play World of Retardcraft, or Retards of Conan, or Retardhammer or whatever.

Since the game remains retard-friendly, there is no motivation to the retards to improve or leave. They are here to stay.

This perspective would sadden a paladin, who wish and fights for a better world, but does not bother a goblin. A goblin is aimed for his own and his close companions good, ignoring the others. You will see the philosophy of this soon. But know this: you are not bound to these retards. The goblin thinking helps you understand this and make peace with the unchangeable while finding ways to still enjoy the life in Azeroth.
You are a free man (or orc, or dwarf or whatever) and you are not bound to boost retards. You belong to people in par of your skills. Don't accept anything less!

Ps: read Larísas post on almost the similar topic.
at 15:41

I also have read the post at Pinkpigtail inn (you are both on my reader) and don't really agree that they are in the same catagory.

She is talking about dealing with underperforming persons in a progression raid guild environment, you are hammering away at folks who happen to have been born with a handicap.

Idiots have a choice, people born mentaly retarded do not.

Are you truely saying that you are so special that people with disabilities are not allowed to play the same game as you?

I'm obviously not talking about the mentally disabled people. I'm talking about people who are simply stupid. While it's possible that some of them have or need medical attention, most of them are just refuse to learn anything, since they belive that they are already perfect and Blizzard would never disprove them by presenting them any kind of challenge.

So I think 99% of them would be capable to learn this game, (after all, we are talking about computer and internet-using people who can speak english) they just don't care.

I honestly did not think you were, but the tone of your post made me wonder.

It might also play into it that I have a daughter who is handicapped and yet playes. Granted she does not raid, or even instance much outside running with family and friends, but she has a good time questing around and just generally exploring.

No offense taken, I get a bit touchy about it is all.

On a side note I notice there is no "contact me" or such associated with your blog. Though you did not ask for my input, I would suggest adding one. That way someone could contact you privately with any concerns or advice they may have.

yeah. I understand the frustration of running pugs, or being in a guild that is a little "too casual" to simply just pay attention to stuff.

But it is a bit unfair to assume that out of whatever percentage of people being unable to down a certain boss as "simple" as the ZA bear boss are idiots. Some groups are simply undergeared and want to try it out anyways.

There is an email adress in "View my complete profile"

krizzlybear: respectfully disagree. While Kil'Jaden is meant for only the elite, the lower bosses can be downed easily. Since me and some buddies formed a new guild, we down Nalorakk every week. In the first time when we were just a few, we filled the positions with PuG-ged people. If a PuG can do it, anyone can do it.

It's not matter of gear too. Nalorakk has 1.35M HP with 10 min enrage. It means 2250 DPS needed to down him. Considering tanks have 150-150 DPS (max armor gear), 4! 490! DPS DPS-er can down him letting 4! healers into the raid, if you are undergeared. 490 DPS can easily be archived in quest blues. The tank needs crit immunity and that's all, since Nalorakk cannot crush. Crafted/quest gear again. So no, undergearing is NOT the problem, Nalorakk can be downed without a single purple item in the raid.

You make it sound simpler than it really is. The healers in my guild can't really keep up heals for 10 minutes straight, especially with the phase transitions in that fight. There's always a tradeoff between DPS and heals, and the raid composition (due to having a relatively small guild) limits us to only 2 healers at a time.

Another example, for the life of me, we cannot down shade with a large number of range casters. We're swimming in mages, so often we don't have much choice with what we have to do. It doesn't help either that the three mages that were brought to Kara that night (who also happen to be excellent DPS'ers) were of different specs, so they couldn't help each other keep up scorch/winter's chill/arcane blast debuffs due to the constant movement required for that fight.

So I guess, let me rephrase. Raid composition also is a big factor. You can't simply just go into a fight with a mix of tanks, healers, and dpsers, even if the ratio is right (we go with 2:2:6 most of the time)

Well, myself I'm a bit less blunt. I avoid calling people "retarded", I rarely even class them as non-skilled, since skill can be about so many different things, as I wrote in another ranting post.

So I would never write such an angry post as you have. Still I can't help feeling there's something refreshing in it!

Letting the steam out. Sometimes you DO wonder what people really are doing in this game. Are they playing drunk? Are they even watching the screen or are they watching TV or having a conversation on MSN?

That is kind of unacceptable if you're playing in a group of people who take things seriously.

I guess what you should do is just as you suggest. Stick to the ones who care. And try to avoid the ones who don't as much as possible.
Wouldn't it be nice if players who seriously don't care could be marked specially, like with a PvP tag. They could play together, not having to be yelled at by serious players. We could easily avoid each other.