The best place for MoA

MoA recently deployed near Cloud Ring with the intent to destroy the smallest Imperium (né CFC) alliance Fweddit. They looked the weakest link due to their near-zero ratting and killboard activity. The idea was to reinforce their money-moons, forcing them to show up and crush them, or force an Imperial deployment to save them. It was a good plan.

It fell miserably, because the MoA killboard became full of Waffles, Pandemic Horde and randoms I've never heard of. MoA simply couldn't fight Imperium elements because of these third parties. The worst thing is that if I'd analyze the data properly, I could predict this. Below you can see the MoA losses (without the troll Revenant) by regions for Feb-May: 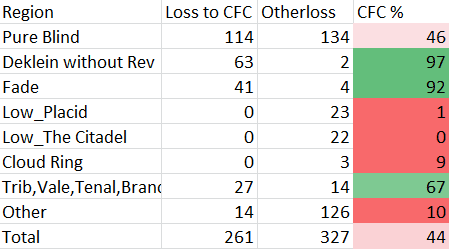 At first, we must notice that the most valiant anti-Imperium alliance suffers majority of its losses to third parties. While it's surprising at first glance, it's rather obvious. Imperium members are known to be terrible in PvP, so fighting them is more like a gank. Third parties on the other hand include skilled PvP-ers.

The second thing to notice is the variation by zones: in Deklein, Fade, Branch, Vale, Tribute and Tenal mostly anti-Imperium combat is done. In Pure Blind, where MoA lives and pilots do missions you can see that the majority of the losses are to third parties (despite Imperial hellcamps). In Non-Imperial zones, MoA suffers 90%+ of its losses to third parties.

Interestingly Cloud Ring, despite being formal imperial region, sees only 9% imperial losses of MoA. From that we could easily predict the disaster of the deployment. It doesn't matter if these third parties attacked MoA due to boredom or because the Evil One paid them. As they are not formally blue to the Imperium, they can't come into Imperial zones without killing (or forcing to dock) Imperium members. While they can come to Pure Blind, they aren't just fighting MoA, they are also "helping" MoA, by killing every Imperium member they bump into. On the other hand at the edge of Imperial space they couldn't bump into Imperium members, as they are ratting in Deklein, Branch and Fade.

I strongly suggest MoA to keep operating deep in Imperium space, living either in their usual PB home or in Guristas space after bluing the locals. Third parties should not be given an opportunity to attack MoA without attacking the Imperium too!


Daily tears: Kyle Aparthos, member of the lowest of slaves of the Evil brought an interestingly fit ship to fight MoA and taunted them. Which ended like you'd expect. He then provided the following tears:

Things may be changing.

A bunch of Imperium have deployed to Cloud Ring, B-D, where they are staging to roam, generally to Brave space.

So it may have become a more target rich environment for MOA.

Generally these are well-organised pvp fleets led by competent FCs.

I've spent most of my eve career killing various N3 members (when N3 was a thing) and I never encountered the "already replaced" phrase until I moved to Imperium space. You shouldn't fly what you cannot afford to lose, but why do they have to advertise it so much that they somehow managed to afford to buy a new one?

"Kyle Aparthos, member of the lowest of slaves of the Evil brought an interestingly fit ship to fight MoA and taunted them. Which ended like you'd expect. He then provided the following tears"
Doesn't really read like tears, read like standard smacktalk. It's also pretty ancient history and a loss of a cheap gank ship. If you go back and look though you'll see that he was actually bombed by a friendly, and the MoA guy on the kill was destroyed too in the same fight.

First of all, it's four months old.
Second, it's instalock Tornado, created to volley small ships, like stealth bombers, ewar frigs and so.
Third, I don't think it's crying on local. I do the very same, just to talk with guys that have killed me. You know, not every word that leaves my [or someone elses] mouth, when he talks to his enemies, is crying. We just like to talk, but you may not know what the whole talkie-thingy is about, because :antisocial:.

Yes, it's my fault that I can't recognize the mutually positive socialization in "fagt".

It actually is your fault that you don't recognise what the capitalisation, the catchphrase and the misspelling are intended to convey (edgy humour, followed by the immediate lower text acknowledgement).

I'm not into using that particular term, even ironically, myelf. But I can see what he is doing.

Well I'm used to call one of our commanders "retarted motherfucker", and he still gets it. He is great FC and I can learn a lot from him.

You don't think like people who actively talk with eachother. You're closed in high-sec station with all your trade thingies and haven't flown in any pvp situation since Fountain invasion, back in 2013, and I don't really expect that you were using local in any situation, except getting intel.

Agreeing with others, that seems like good natured chat post fight. Every ship involved is cheap, no real cost to either side and Kyle seems to just laugh it off.