Who kills the bling of CFC?

A new kind of comment appeared, trying to protect the "Mercs have it harder than MoA" theory: that MoA kills expensive ratting ships, while highsec mercs must find and catch elusive small ships. Instead of random opinions, I gathered all the CFC loss data I have, 9 months from May 2014 to Jan 2015 (you can find their links on the GRR page) and analyzed them all for ship sizes. The losses were separated into 4 groups, the limits were selected to make the groups approximately equal. Below you can see the losses of various CFC alliances in different size groups: 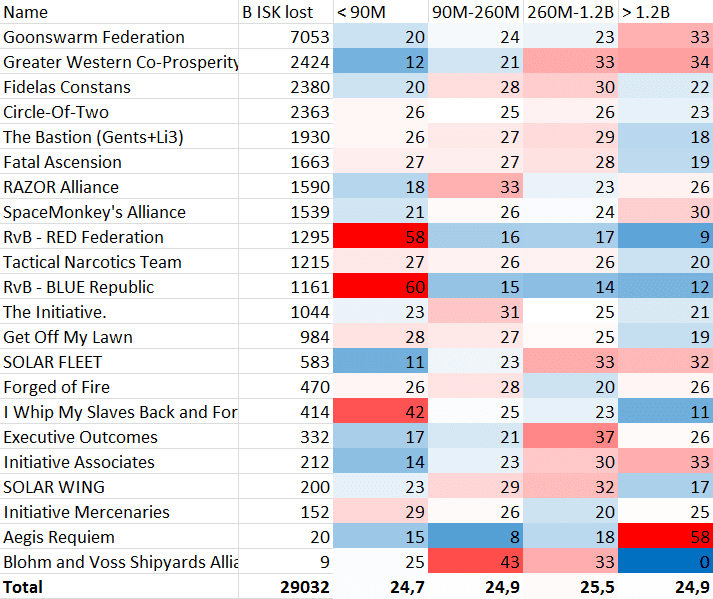 As you can see, GSF and renters are more likely lose big ships, while RvB is mostly losing crap.

You could see how each group has about 1/4 of the total ISK losses. Of course it means very different number of ships:
Now let's see the killers: 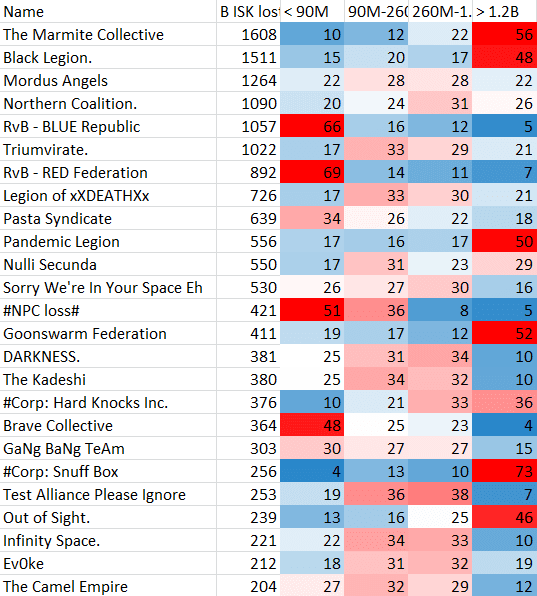 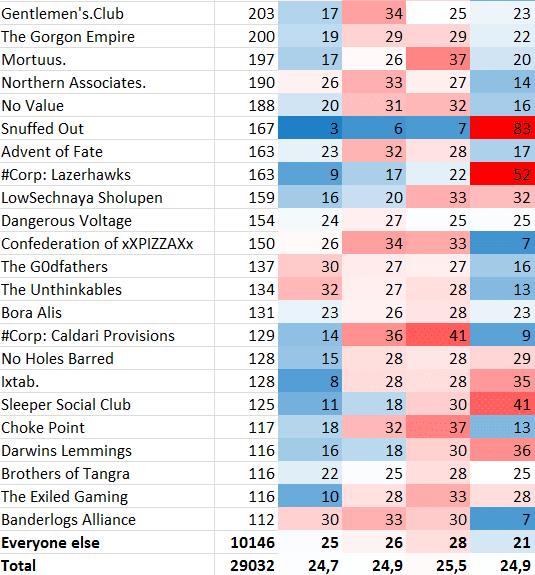 As you can see, the truth is the very opposite: Marmite Collective killed mostly whales and MoA killed mostly middle sized ships. One more excuse down.

By the way it's funny to see NPC losses and several CFC alliances among the top CFC killers.

> By the way it's funny to see NPC losses and several CFC alliances among the top CFC killers.

We do this for social reasons (social reasons being what you probably despise, most). For Vile Rat Day, for instance, we had a huge brawl in which we killed several of our own carriers, dreadnoughts, machariels and more. One problem with the analysis of your data is that you believe that a kill is a kill: you include these, RvB kills (which are the entire point of their game) and more.

Far from striking crippling blows to the "evil" CFC, they are the sort of fun that keeps us happy and active. Because that is what you would call, social and moronic, you discount that, I accept.

No, you do this because "all reps on Cain!"

Interesting data. Rounding up, over those nine months, the various alliances you include lost about 30 trillion ISK. Leaving aside the question of whether lost ships really are an existential threat in what is an open PvP game, I was interested in whether that was affordable.

Bat Country makes, on average, about 1bn a day from our ratting tax at the moment. Our tax rate is 9% so members are making roughly 9bn a day. Our 228 member characters make up one 52nd of the whole alliance, so lets extrapolate and say that ratting alone (ignoring private, corp and alliance moons, pocos etc) means that members make 52x9=468bn a day. Let's round that down to .4 trillion a day in ratting by Goonswarm alone, which makes 108 trillion ISK in the nine months you mention.

At the moment, that means that all the CFC losses you mention can be covered by Goonswarm members alone out of ratting income with a 708 trillion ISK profit.

Of course, a great many of the losses receive reimbursement through the alliance out of alliance moon, poco, station etc income, but we will pretend that every ISK comes out of member pockets.

I have seen a figure of 36,000 members of the CFC mentioned, although you include huge numbers of people who nobody else claims are CFC (RvB, Solar etc), but let's ignore them. Assuming that on average they rat like Goons (some will be more, like the renters, others less, but it's a useful assumption since we rounded down income by about 20% in the first place), that means 324 trillion isk income over nine months, of which the losses you list make up a bit under 10%.

I suspect that this is not a hugely effective approach, but you may see it otherwise.

Embarrassingly, I don't get the "all reps on Cain" reference?

The "All reps on cain" reference: http://lmgtfy.com/?q=all+reps+on+cain

Now I don't know if you were lying here or Bat Country is ratting 3x more than an average Goon, but you won't fool me with numbers either way.

I'm not actually surprised that my back-of -a-fag packet numbers were a bit off, but going with those figures which say that losses are 20% of ratting income instead of the 10% I came to, so I'm surprised I got so close! It is still pretty hard to destroy the CFC when they make 5 ISK for every one they lose!

It's obvious that 1ISK kill for every 5 ISK made won't destroy the CFC. It's even more obvious from the fact that CFC exists despite all the losses I financed.

However all this means that more CFC must be killed. I never said that I can single-handedly destroy the CFC. I need to find others who finance the holy war.

... and also, thanks for the explanation on the all reps on cain thing. I'd forgotten about that episode. That's what happens when I go on holiday for a few days!

> I never said that I can single-handedly destroy the CFC. I need to find others who finance the holy war.

The interesting question on that is whether it is achievable on either the demand or the supply side. Do you honestly believe that there are many others who are prepared to contribute substantially to this project? It has been quite a long time and neither the Moa nor the Fountain War donations boards saw anything to really match your undoubtedly substantial spending.

And on the other side, do you think that there are really more potential Moas out there to be funded into attacking us? Moa's leadership are understandably upset at being thrown out of the CFC (since they never showed up for ops) and so have a personal reason to fight us, but most people play Eve for a more varied experience and so are unlikely to spend their every evening ganking dumb afk ratters, fun as that undoubtedly is on occasion.

Making others donate is indeed something I need to work on, but highsec gankers help making industrialists hate CFC.

About a stream of nullsec PvP-ers hating CFC, I'm not afraid: http://greedygoblin.blogspot.hu/2015/02/weekend-minipost-ducks-are-raging.html

The Highsec gankers are Predominantly Bat Country, as you have been kind enough to point out before!

On Raging Ducks, we have this every time we kick out a corp for not participating. RDU will continue to hang out for a while longer but they will have to move and join a (hostile, no doubt) bloc eventually of their members will continue to evaporate. If our enemies do what the HBC did with people like Banderlogs and grow from corps we kick out for not being good enough for our standards then that bodes well for us!

Why is the discussion moving from the core topic to vague, generic "He said, she said, so she said to him?"
Back on topic, Goblin has proven beyond reasonable doubt that Mercs do not have it harder than MOA. The rest of these comments are mostly noise.

You are aware that highsec ganking is a very much minor part of the CFC?
I'd propose that if you are a highsec miner/pve'er/industrialist that CODE is a far more likely target of animosity than the CFC.

I'm new here, why is RvB considered part of the CFC?