Like in November, I processed the downloaded Dotlan data for December: 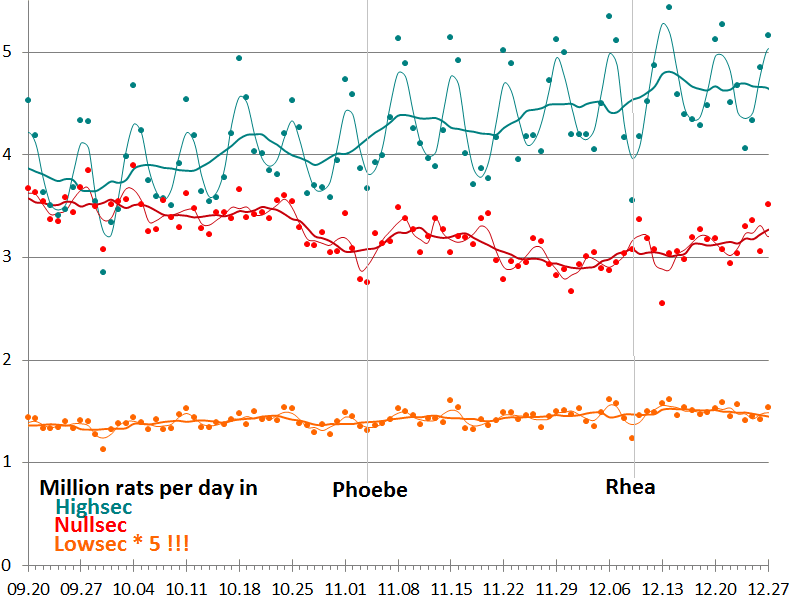 We can see that highsec ratting continued to increase, while nullsec ratting stopped dropping. I moved lowsec data from 10x magnification to 5x to avoid overlapping with nullsec. What I missed is the drop at Rhea. Noisy gamer claimed that the graphics updates of Rhea broke bots. Well, we don't see that on the ratting graphs. Either the bot developers fixed their programs fast or botters aren't significant contributors to rat kills. To decide which, I checked the daily oscillations. You see, more people play in weekends than in weekdays, which should mean higher rat kills on weekends. And the highsec data shows just that: 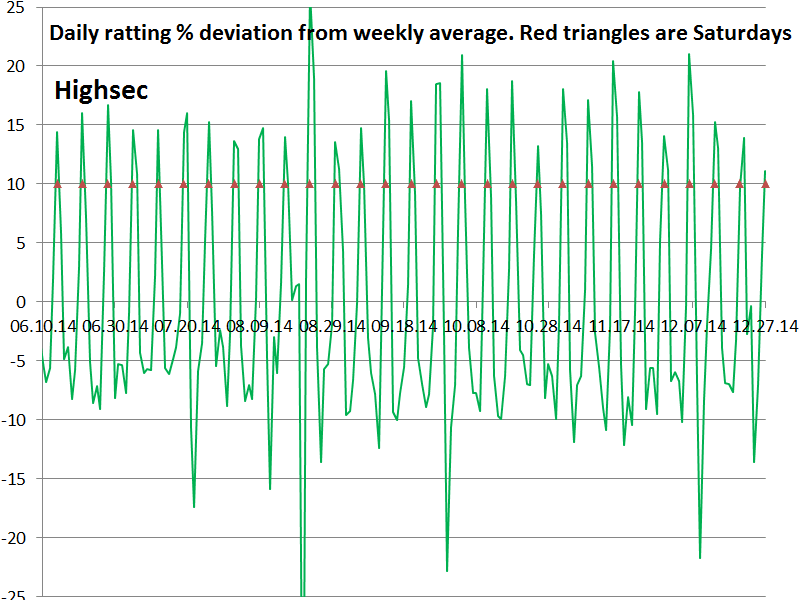 Nullsec data on the other hand is not only much less oscillating (see smaller scale), but since Phoebe, it completely disconnected from weekends and rather show a random variation: 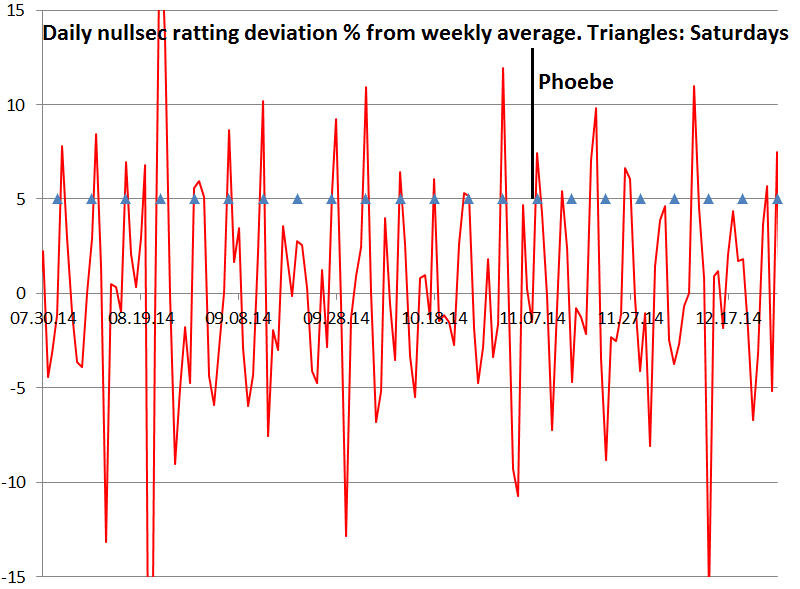 So we can conclude that nullsec ratting is dominated by botters and bot-like nolifers. It will be interesting to see how the Jan 1 input broadcasting changes and the first banwave hitting broadcasters will affect null ratting.

CFC continued to lose ratting share, along with the PL renter empire. We'll see if they can restabilize on a lower level or keep dropping. 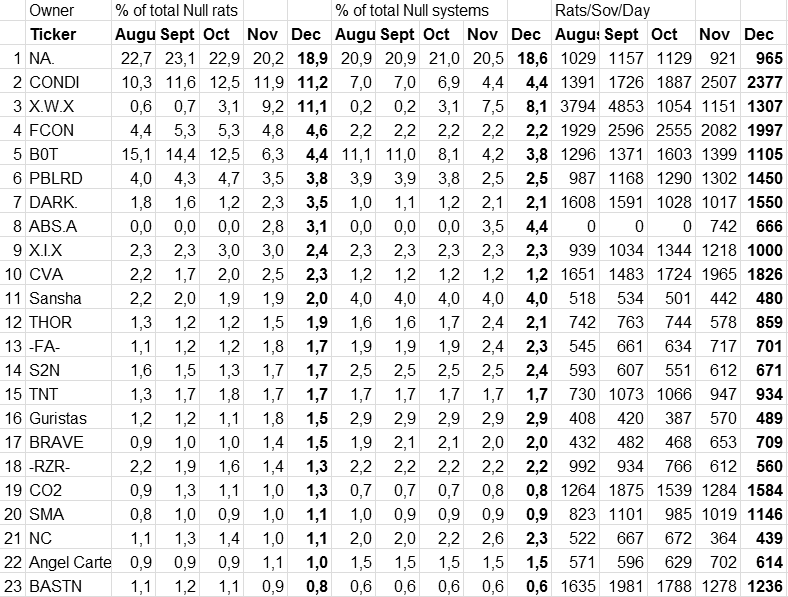 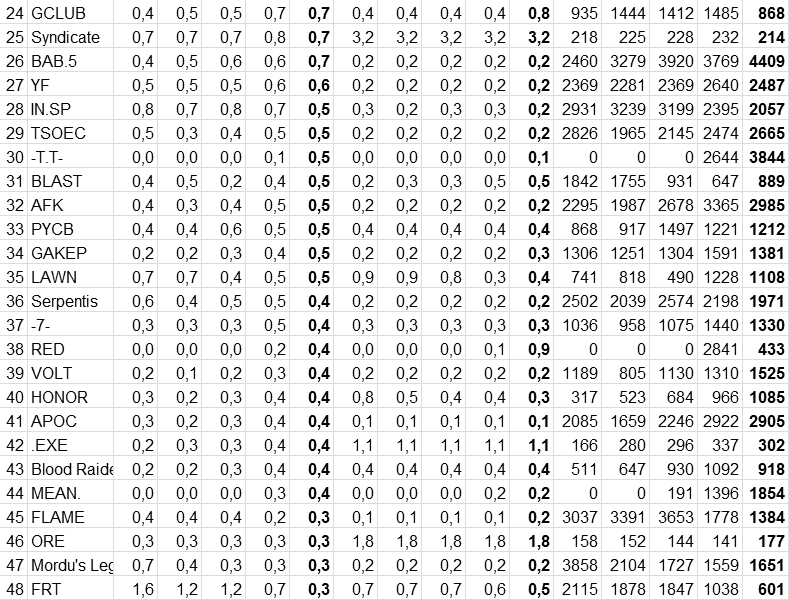 We can see that both Goons and FCON kept losing rats, the only CFC member capable of increasing their activity was PBLRD. It seems CFC members log in less to do their defining activity. Playing WoT is more fun I guess. The renter reorganization from NA and B0T to X.W.X and ABS.A is clearly visible and I still have trouble figuring out what ABS.A and Total Absolution is? Renters? Bad N3 members? Because their killboard is pretty random and light while they rat more than whole HERO coalition. 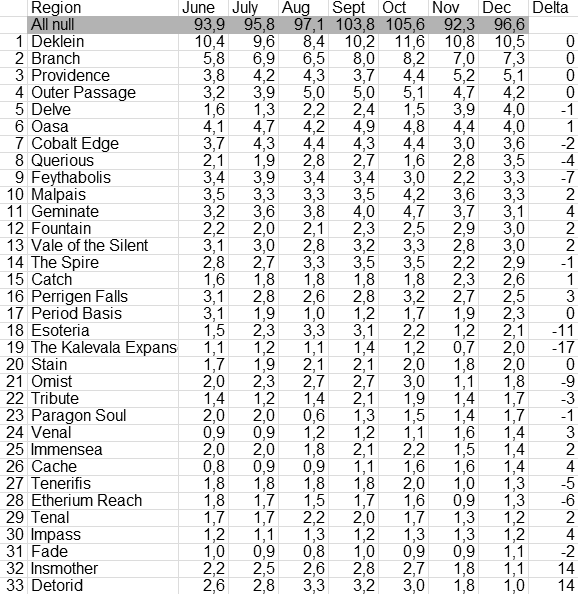 Nothing really shocking on the regional display, Delve and Querious are coming up while Insmother and Detroid received a serious blow in ratting activity.

To summarize, Rhea didn't cause any meaningful change in ratting, the Phoebe effects are stabilizing.

Total Absolution are not renters, but Absolution Alliance is their rental empire.

What do the stats look like from 9-14 December? Because the 3 bots (Questor doesn't really count anymore) I look at were pretty much broken during that time. They started coming back on line will full fixes on Monday.