After the fixed January report I hereby present the February data. As you probably know, I analyze the killboard because I want to remove kill whoring. If a pilot does 0.1% damage to a 80B titan, he'll be credited with 80M damage and not 80B like on the usual killboards. As usual, another error was found, Fatal Ascension and I Whip My Slaves Back and Forth were not listed among targets, despite damage was done to them in January.

You can download the raw data for Marmite and Lemming kills, the header is: "Code Date Place Value Pod? Victim_alliance Lemmings_part Marmite_part" 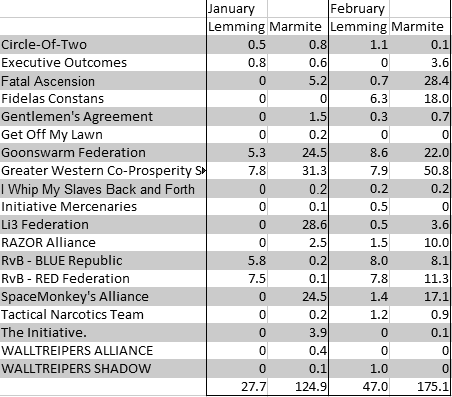 As you can see, 222B damage was done to the CFC, that's 46% growth from the 152B of January. Marmites also had 1039B non-campaign related kills, which is mindblowing, considering their 300 men size and the fact that this whoring-free, true damage. This also means that Marmite does lot of other stuff and my campaign is just a small part of their operation. Lemmings had 64.6B kills on non campaign related kills. It shows that many Lemmings gladly shoot anything they can. We have to deal with this, making sure they have enough campaign-related targets.

Here are the campaign-related kills with 500M+ Marmite/Lemming contribution: As a comparison, here is the 2013 GSF highsec loss chart: The average monthly loss outside of Burn Jita was 40.2B. This month the GRR project caused 30B damage alone, which means large increase in making highsec a bad place to be for Goons and pets.

Now let's see the losses. You can download the raw data for Marmite and Lemmings for your own analysis, the header is "Code Date Place Value Pod? GSF_part RvB_part ".

Marmite had 60.3B total losses, which means 95%+ ISK ratio. 0.5B was done by GSF, which is pitiful compared to the 22B damage they got. Damage from RvB on the other hand was 16.9B, making the ISK ratio of Marmite against RvB mere 54%! It's not a mistake or a miracle. RvB was created exactly for this purpose: to scare off highsec wardeccers from hitting CFC by ruining their ISK ratio. Luckily Marmites aren't easily scared, despite they had some 500M+ RvB losses: 1562M, 1425M, 748M, 601M, 507M.

I put 18B into the project in January, compared to this, the 222B damage is huge. I'm also happy to see that damage scales well with ISK put into the project. I will have more on this tomorrow.

What looked like a silly project, grown into a serious trouble for CFC. While RvB is indeed a problem, they couldn't stop us massacring the Goons and other nullsec pets. Yesterday I wrote that I'm certain that RvB is doomed, despite I knew the 43%/54% ISK ratio. The reason for that is simple: "killboard is green" is irrelevant in a war. The Lemmings suffered 20.9B damage from RvB. Is it a high number? No, because they still had resources to attack suspects, outlaws, people with kill rights and suffer almost equal damage from them. Remember that Lemmings had more kills on non-campaign targets than on campaign targets. They look rather bored than overloaded.

On the other hand look at the RvB losses (B ISK/month), using the last two years zkillboard loss history for Blue and Red. While it's not perfectly accurate, it's usable (unlike the kill data, which is inflated by Titan whoring), and their own killboard claims around 50% ISK ratio, so their kills are similar: 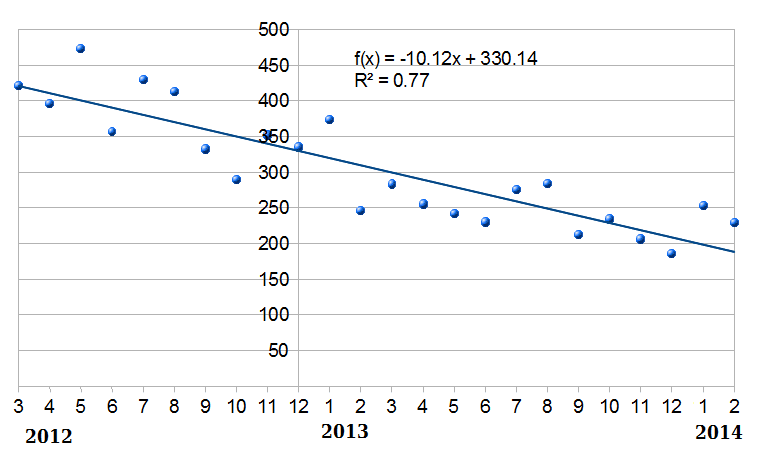 As you can see, RvB is dying even without Lemming and Marmite interference. I guess this happens if your leadership aren't enthusiast members of the community but spies and alts. Anyway, currently they can bear 200B damage/month. They got 35B from Lemmings and Marmites this month and our numbers are growing quickly. Since our damage grows and their power diminishes on its own, very soon we can simply inflict more damage than they can bear. While the growth decreased since January (used to be 8/day, now just 6/day) it's still a dynamic growth, unlike the decreasing graph of RvB.

"The reason for that is simple: "killboard is green" is irrelevant in a war."

You do realize those are the exact same measurement, right? That 'killboard green' is 'winning the ISK war', ie: doing more isk in damage than the effort is costing you?

You also say 'Luckily Marmites aren't easily scared', but the actual data you are quoting would seem to show the exact opposite: Marmites are sniping lone ships, ganking freighters, and camping gates. When an actual engagement arises, they run away - part and parcel of your 'fleeted up for nothing' concept.

If Lemmings and Marmite are so 'bored', then why do they keep running from actual fights?

"killboard is green" is NOT equal to "winning the ISK war"


Marmites aren't scared of having losses. They aren't idiots though to undock into a blob.

I think I know, but I would prefer to get confirmation before offering a critique.

Billion ISK lost in that month by Red+Blue.

"Marmites aren't scared of having losses. They aren't idiots though to undock into a blob."

Actually, they are and this is public knowledge. That's just how mercs advertise themselves - show kb stats and hope the employer can't read between the lines. Is it good or bad in your case? I don't know. But it sure is far stretching to say they do fight.

So you are claiming that RvB is dying because they dont lose enough isk per month?


Additionally your "project success" should not be measured in damage done to goons, but increased highsec damage done to goons. I have not done the analysis myself and dont plan to, but there is the possibility that your merry band of retards just takes a bigger share of the highsec gank goons pie even though the pie itself is not getting bigger.

"Getting bigger share of the pie" is theoretically impossible unless you claim that every single Goon who comes to highsec died. Otherwise the pie contains "Goons who didn't get caught" and this share decreases.

If the lemmings are "bored" and shooting at non RvB targets, it means they are excessively risk adverse. It's no secret where we are. They aren't doing what they are supposed to be doing.

As far as RvB dying, there seems to have been a shift between 2012 and 2013 - the numbers are almost flat since then. It also seems that your presence had *no statistically significant effect* on our loses. It's just noise.

I'll admit that there is a gentle decline still visible, but at that rate it's going to take you years. It may only reflect a shift in our Meta.

"Marmite had 60.3B total losses, which means 95%+ ISK ratio. 0.5B was done by GSF, which is pitiful compared to the 22B damage they got. Damage from RvB on the other hand was 16.9B, making the ISK ratio of Marmite against RvB mere 54%! It's not a mistake or a miracle. RvB was created exactly for this purpose: to scare off highsec wardeccers from hitting CFC by ruining their ISK ratio."

This is a terrible analysis. Just because RvB bothers to fight vs Marmite, and the CFC doesn't, is no proof that RvB was created to defend the goons. What you have to show is, *before* the "POCO era", that there is a strong correlation between marmite wars vs CFC and marmite wars vs RvB. You also have to compare this correlation to other wars between marmite and other large alliances (N3 etc).

The "just noise" is the result. My theory is that an average RvB pilot has a monthly budget, "I burn 100M on RvB fun". If they lose it to us, they don't lose it to Red vs Blue fights. This is why I claim that RvB can be exhausted. As soon as we can do 200B damage, actual RvB activity will halt as the members won't have budget left.

It's a fact that only RvB is capable of fighting back to Marmite. It's not a long shot to assume that it's not by accident.

"Marmites aren't scared of having losses. They aren't idiots though to undock into a blob."

A dozen or so of them, including battleships. Less than 24 of us, nothing bigger than a cruiser.


"It's a fact that only RvB is capable of fighting back to Marmite. It's not a long shot to assume that it's not by accident"

Wait, so which is it? Are we not killing Marmite because they won't 'undock into a blob' or because 'only RvB is capable of fighting back to Marmite'?

If those are the entirety of the opposing groups in the same conflict, then those numbers don't add up. One side can't destroy 100B isk of the enemy w/out the enemy having lost 100B isk.

If those are not the entirety of the opposing groups in the same conflict, then those numbers are incomplete and thus, meaningless.

They're also meaningless out of context. If I can replace a hundred ships for each one you can replace, then I only need to kill one of your ships for every 99 of mine you kill.

"It's a fact that only RvB is capable of fighting back to Marmite. It's not a long shot to assume that it's not by accident. "

RvB is capable of fighting back because we are a high-sec PvP alliance. Most Null-sec players who go in high-sec are here on business (ie not ready for a fight, nor willing).

First I think you are right that some (but not all) RvB members have a budget for RvB fun. But RvB fun doesn't just include red vs blue fights. You are providing content.

Furthermore, you are a *long* way from doing that amount of damage. You are an order of magnitude of. You *might* be able if you actually fought... And provided more content to us ;)

Gevlon, I would be interested to see the same analysis, but excluding pods from the damage done and received.

The rational being that implants are a sunk cost - once they are plugged in, the isk invested cannot be used for ships.

As such, destroying a pod has no impact on the ability of the pilot to lose ships, which is core to your argument of being able to defeat RvB.

There are combat and learning implants. Destroying combat implants force the pilot to replace them or give up increased combat abilities.

Learning implants increase SP gain. The pilot either replaces it or gives up SP gain.

My point is that the pilots want to use the implants they used and replace them. Of course it's not always true, it is possible that the learning implants are no longer needed, therefore the pilot do not miss them upon destruction.