CCP announced the "PLEX for GOOD: Philippines" initiative. In this, you can contract PLEX to a CCP character "CCP PLEX for GOOD" and CCP will pay $15 for every PLEX received to the Typhoon victims in the Philippines via the Red Cross. 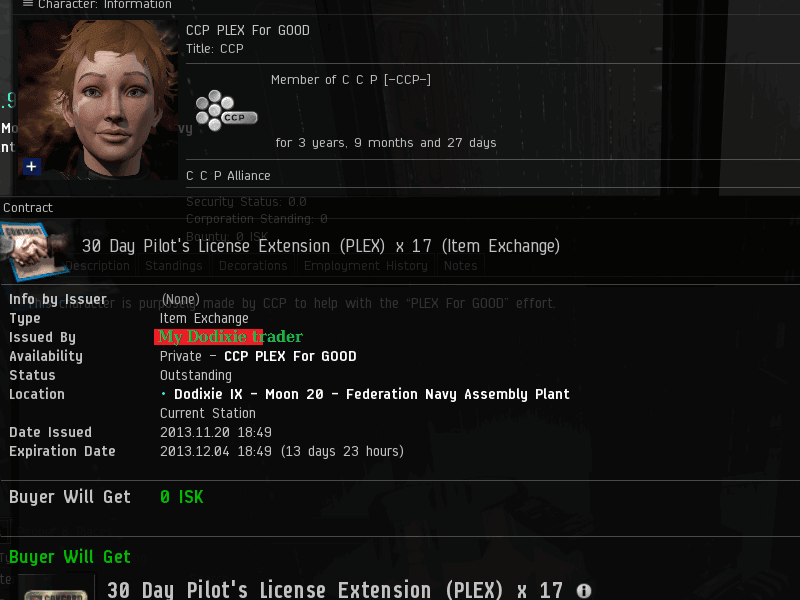 You might be surprised that I donated for something. You might don't remember that I suggested a new economic model that has high taxes (preventing the first Depression to repeat) while not paying welfare to the leeches but spend it for a better World.

Saving disaster victims qualify, even if they are responsible for their fate (they lived in obviously not storm-proof buildings, had no shelters, supplies). The consequences of ordinary dumbness arrive slowly, like you have to pay more and more to the banks as you get deeper and deeper in debt, so you have time to reconsider your life and make changes. Disaster victims had no time to do so, if we won't save them, they just die without chance to fix their mistakes.

While I believe the government should spend tax money on saving them instead of giving it to the leeches, that option is not available. However spending my own money is available, so I regularly donate for worthy projects.

CCP made it possible to donate your space-wealth, I suggest to take on it.
at 03:00

"even if they are responsible for their fate (they lived in obviously not storm-proof buildings, had no shelters, supplies)"

The majority of the hardest hit live in abject poverty. It's not rational to choose storm-proof buildings, shelters, and supplies over food to prevent you from starving, and that's essentially the choice they were given.

A lot of your moron-bashing logic doesn't work in the third world.

People earn money doing their jobs, then spend it buying PLEX, then choose to auction these PLEX away in a game economy...

Where someone picks them up for virtual currency and removes them from economy, under promise of CCP giving less than full price of PLEX as a donation.

Congrats to CCP, they found a way to take commission from charity :D

Actually your wrong about "no provison". Phillipines got hit by a mag 7 earthquake the week before the storm hit. It destroyed 300 year old churchs dating from the spanish colonial era and, insidently, the shelters people use.

That was the tenth typhoon to hit the phillipines this year and they expect 2 more I am told by the end of this year and its hurricane season.

So no your wrong about them being responsible for their fate when their shelters were taken out in my opinion.

"Saving disaster victims qualify, even if they are responsible for their fate (they lived in obviously not storm-proof buildings, had no shelters, supplies)."

They had been hit by an earthquake 2-3 weeks previously...and the storm which hit was the strongest to ever make landfall. I doubt any country had buildings which would withstand those winds, not yours, and not mine, and I have seen no western country which has houses that can withstand those sustained winds, and the mudslides, flooding and aftershocks exacerbate the damage.

@Maxim: CCP donates $15 per PLEX.
If all PLEX donated are created from GTC's sold by resellers then perhaps CCP only gets paid like €13 per PLEX and loses money.
This is money that would have been revenue instead.

PLEX for good is not meant so you can spend RL money, convert to PLEX and donate to CCP. You are better off donating money to charity directly instead.
PLEX for good is meant for space rich people as alternative to donating RL money (and acts as an isk sink on the side).

"they lived in obviously not storm-proof buildings, had no shelters, supplies"
That's my favourite Gevlon quote to date. As anon rightly pointed out, they don't do that by choice. They won't "learn" to build better houses. They can't afford to build a storm-proof house, so if a storm hits, there's nothing they can do.

Also, I'm surprised you only donated 10b. That probably won't even get you in the top 10 donations league, and with your net worth that's pocket change.

How do you storm-proof a slum?

I think the Politicians shoulder far more of the blame for people's poverty and their resulting living conditions in the thirdworld.

In fairness to CCP, this program costs them money, even after tax.

If something like that would happen here in my region. 1st world. and Murphy's law hit big time. there will be no drinking water within a week. So people will rush for caned water and robe everything clean. Absolutely no doubt about that. And it will look the same as we all have seen in countless news features.

I don't have a solution.
All the war in the world and the competition and cutthroat bitching between ourselves lets me assume that a charity is more a tool to calm our guilt instead of helping each other. But I'm a mindless 1st world workdrone so no I don't have a solution at all nor do I see the real cause.

Anyway. I guess it's a good thing that CCP does this.

@maxim your math is wrong. CCP is giving 15 dollars back from every plex already sold at full price. That is cutting your earnings, not getting commission.

First a comment on maxim, my plex costs less than what ccp is donating so I missed your point.

Now for the charity issue; Charity from you to others is a luadable thing. However taxation upon you so that a controling group can decide who needs and will recieve assistance is a bad thing. I haven't decided weather to donate or not. I am a very firm believer in you help your neighbors before you help the pople in the next town. Why donate money for food programs overseas when there are hungry in your own home nation?

There is always something you can do, and I'm sure it's being done right now. You know Philippines has its government and army, and could be evacuating people or building shelters.

"the people" responsible for unpreparedness is not surely the individual, it can be the nation.

But as a last resort, everyone can choose to run and become a refugee if neither himself, nor his nation is capable to prevent an upcoming disaster.

@Provi miner: because the hungry in your country is a lazy bum who refused to learn and work, unless you just had an earthquake or war.

@ Raziel Walker: "PLEX for good is meant for space rich people as alternative to donating RL money (and acts as an isk sink on the side)."

An ISK sink is something that takes ISK out of the economy, buying a PLEX for ISK gives that money to another player.

I live in a country where storm ready shelters are mandatory under the building code... built to some of the highest standards there are. In areas where tropical storms are more prevalent, the building codes are even more strict... and our buildings would not have withstood the typhoon that hit the Philippines.

It isn't practical to storm proof modern buildings to withstand these kinds of winds...let alone slums.

I think some of you are missing the point - yes Gevlon said a few silly things in this post, but he is using his space wealth to provide real help to people in need. We all should follow his example for once.

That being said, someone said this would be an isk sink. It is not. It is a Plex sink. No isk has been destroyed. However, by destroying PLEX *and* injecting in the economy lots of isk that was a bit static (ie sitting in someone's wallet, ie a slightly inflationary move), this will diminish the supply of PLEX thus driving up their prices. This may be why there also is a plex sale at the moment.