The fundamental problem with the AFK cloaker

EVE players hate few things more than AFK cloakers. AFK cloakers do exactly what their name implies: cloak up and go AFK. Doesn’t look too dangerous, right? But still, a single AFK cloaker can shut down PvE in a nullsec system and spawn countless of threads that demands CCP to somehow make AFK cloaking impossible. I never cared for AFK cloaking. Actually I never cared for who is in local channel both in my highsec trading/hauling and my nullsec fleet flying. I might checked if local spiked, but a single hostile was always ignored. Why do other people care about AFK cloakers?

I found the solution when I started AFK cloaking myself to break “white knights” who protect the miners from ganking. Considering that you can’t gank while AFK, I was totally harmless in this state, yet my actions were enough to make the good socials give up on their noble quest of defending the innocent. Later I analyzed that their problem is that they depend on skill instead of proper doctrines.

From these I could figure out what is fundamentally wrong about AFK cloaking: the activities were based on "security trough obscurity" and the AFK cloaker breaks obscurity. Let me explain it with an example: if you announce where and when you will rat in a Nyx, you’ll lose that Nyx in a day or two. The rational conclusion from this fact is that ratting in a Nyx is a bad idea. Still many people rat in Nyxes when no one is in local, because if no one knows that he is doing it, he can get away with it. The AFK cloaker can know therefore his presence denies you the ability to rat in Nyx.

However your problem isn’t the AFK cloaker. Your problem is that you are trying to do something stupid that will end up with a disaster if anyone figures out. But obscurity isn’t the only solution. The other solution is not doing stupid. If you are ratting in an omni-tanked, non-blinged, insured T1 battleship you can ignore the AFK cloaker. It’s very unlikely that someone forms a fleet for killing it. If some random roaming punk comes, you have good chance to kill him or at least get away while ECM drones disable tackle. Using the battleship is a stable solution, therefore it can work when discovered. Using a Nyx is an unstable solution which can only work if no one knows. Similarly, mining in a Procurer or an empty-pod, insured, 18K EHP Retriever are stable solutions, you can ignore your surroundings, your doctrine guarantees that you won’t get into trouble, even if dozens of ganking Goons are in local. Mining in Mackinaws with valuable pods under white knight protection is an unstable solution and only works while the knights are on top of their game, which they can’t be 24/7, hence they rely on knowing the small windows where gankers are hunting. My AFK cloaking broke just that.

I turn the above back: "if you care about AFK cloakers or local channel, you are doing something you shouldn't". For example ratting in a too expensive and PvP unable ship, mining in untanked ships, botting, hauling too expensive cargo, flying what you can’t afford to lose or do some other dumb stunt that you know would fail if anyone would figure it out.

So instead of whining about AFK cloakers or staying docked while hostiles are in local, how about fixing your actions, so they can work in spite of hostiles? I literally hauled several billions trough Narja and Uedama with dozens of Miniluv on local, camping the very gate I jumped trough. I didn’t care because my ship wasn’t a dumb freighter. Of course the fix is maybe not something you like. For example highsec miners should use tanked ships instead of max yield Mackinaws. But they want the yield, so they keep doing it, relying on white knights or setting known gankers to red and watching local (when they aren’t AFK). Smaller alliances that cannot protect their assets should abandon nullsec or join a coalition. But they want the “ima null pvpr lol” badge, that they try get some ISK when no one is looking. Then they go cry on the forum when a 100K SP Rifter pilot with a prototype cloak shuts their op down. Their problem isn’t the AFK cloaker but the fact that they are practically ninja-ratting in their "own" Sov. 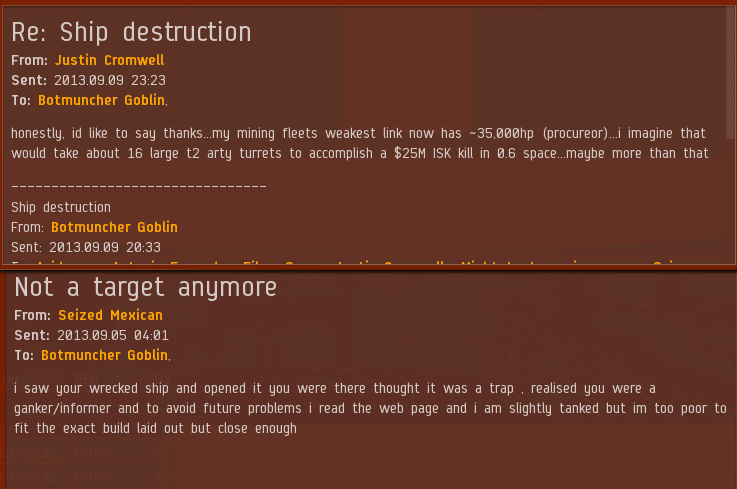 Worrying about an afk cloaked in high sec is pretty silly.

Worrying about local in null on the other hand is perfectly rational, because it's not the loan tengu you have to worry about, it's the fleet that he'll covops bridge in. No matter what your fleet setup is, you can be killed by a sufficient fleet of t3s, force recons and covops. And such a thing would happen on pretty much a daily basis when last I ratted in Null (fortunately only happened to me once, but it happened to someone in my systems alone 3-4 times a week)

This isn't to say afk cloaking should be removed (though I think arguments could be made for this), but the argument that people just don't like afk cloaking because they refuse to fit their ships right simply demonstrates a lack of game knowledge

@Von Keigai: while you were sarcastic, TEST did exactly that while in HBC, being blue with PL, ratted in supers and posted their own screenshots with locations.

The other option is ratting in cheaper ships that you won't cry losing.

I think outright calling everyone doing Nyx ratting, or equivalent, is going a bit too far. After all, that's nothing but old-fashioned risk vs reward. Nyx rats like a mofo, but you can get jumped and lose a lot. That's fair.

Just want to point out that being able to secure a good outcome no matter who does what is the essence of strategy, while trying to cash in on a risky enterprise, hoping you somehow get away with it, is the essence of gambling.

The ones who are at all successful though (at least based on blogs and chat conversations) follow a strategy and minimise gambling.

If a single AFK cloaker can have that much of an impact, what would happen if you could cover a whole region in AFK cloakers 24/7?
This seems a reasonable task for a well-organised corp of ±50 people. WGBWC doesn't yet have 50 people, but time should fix that :)

The problem is not that the afk cloaker may attack any time, the problem is you don't know what will attack you thanks to cyno and bridges.

Even if you go ratting in PvP doctrine the one cloaky guy will simply report what you fly and the guys on the titan bridge just bring the right ships.

and mister von keigai is obviously a fan of blue donut where only one entity is in 0.0. can't imagine how boring eve will be once it comes to that.

@Gevlon
With both the ratting and the high sec mining you seem to have one idea. You seem to be advocating a way to spit in the face of aggressors and say "look, i can still mine" or "look, I can still rat".
We don;t want that. We want isk efficiency. In both situations, simply moving system solve the issue.
I'm not going to fit an omnitanked T1 battleship. that will at least halve the isk/tick from a T3 and be a true nightmare to play with just so I can give the finger to would be gankers, who will then still gank me. And sure, I can insure it, but as you know, you pay 30% hull cost to get 100% hull cost back, so you get at most 70% hull cost and no modules back. That's not exactly efficient.

The complaint about AFK cloakers is mainly around how an AFK cloaker has as much impact as an active cloaker, but for no effort. Much like how you hate AFK miners and botters, no activity in game should require so little effort. The other complaint is from active cloakers who complain about null players, calling us risk averse. That also come back to AFK cloakers. If i cant tell if a player is AFK, trying to find him is a total waste of time. So I won;t bother, I'll just move. If that makes me risk averse, who cares, I'm ratting/mining for isk, not so someone will think I'm amazing at overcoming adversity.

Gevlon, while your argument is valid assuming the rules of the game are set in stone, you are missing the even greater picture: gameplay.
CovOps has no counter, that allows it to go AFK which no other class is allowed to do in game. This removes gameplay and adds none.
Allowing for the possibility of detecting and eliminating covops, even if it took 2 hours to achieve would add gameplay and introduce additional risk/reward elements.

It's really funny when I hear suggestions like "have your own fleet on standby". AFK cloaker is the point of AFK. You never know if he is hunting or is just afk. Waiting for him, unless you know it's a good chance he is active is waste of time.

Too bad people are just too lazy. It's very easy to do a proper research who is the afk cloaker, what is the fleet, find out names and put them on watchlist, find their staging system, add titan/BO pilots to watch list, put your own afk cloaker scout and etc.

Not to mention deadspace baiting (have a guy inside deadspace and fast bomber locker nearby, so that when guy warps "to 100" still lands on gate). If you missions nearby, get a recon mission that instapops bombers/cov ops frigs.

In the end, eve is a patience game. Organize one shiny bait and a counter drop and rejoice. Or esle I suggest moving to wormhole space.

In w-space we don't have an afk cloaking problem . Check everything and still expect to die!

"In w-space we don't have an afk cloaking problem . Check everything and still expect to die!"
In w-space you don't have cynos. I wouldn't give even a little bit of a shit if the cloaker was all there was to worry about.

Leaving a foreign entity alone in your system in w-space is you asking to lose your assets. Yes you really do care about everything that drops in.

Maxim got this one. People like gambling. They like the 'rush' of doing something dangerous and risky, even when they know the odds are against them.

For a rational person gambling money away is idiotic, but I've seen many people throw money down the drain in casinos, knowing fully that they will 99% of the time lose, and yet they justified it with 'it's fun'. The lockboxes in MMOs also function on the same principle and they bring in crazy profits.

"If you are ratting in an omni-tanked, non-blinged, insured T1 battleship you can ignore the AFK cloaker. It’s very unlikely that someone forms a fleet for killing it."

Said no neutral fleet EVER.

NC (and PL) HAVE AND WILL drop multiple supers and carriers on a SINGLE battleship. I've seen the loss mails.

You might say the loss will not bother you and it is worth the risk, but to say no one will bother to cyno a fleet to get on a BS killmail simply means you know nothing about the subject.