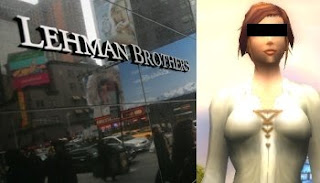 In a world, far from the simple lands of Azeroth, the banking community wiped. Not one insane broker drove his bank into oblivion. Not a type of corporations collapsed under the necessities of the changing world. All and every money institutions lost huge amount of money and many of them, including the very largest ones went bankrupt or live only because of governmental help. The USA is now try to save as many of them as possible using $700 000 000 000, which is the price of 280 000 epic mounts in that distant world. And it involves not only one country, banks in Europe are also in trouble, the UK sent L250 000 000 000 to the money markets, the stock market of Russia was forced to close.

How could this happen? How could it happen that all of these brilliant minds, trained in the very best of universities couldn't prevent, strike that couldn't predict it?

If there was foul play involved how come that no one is in prison?

And why is poor lvl 1 Thelnia is pictured here as someone guilty?

Day by day you come to see this blog. Every day you see a post with the business of Gevlon. You see as his account balance goes higher and higher. This is the proof, that my advices actually work, I don't just set up blind speculations. I'm practically telling: "come, follow me into riches". If I'd be still around 80 copper, you would just laugh and go away thinking "a 13 years old kid set up nonsense to get some attention". So the reliability of all my analysises and philosophies depend only on the question: does it work, or does it not?

Every day you see a report like "The daily balance is 1815G, 138 auctions, 28 bids, 1680G at Thelnia". Approximately half or my money is in the Thelnia fund. Yet, nobody, ever asked what Thelnia is doing?! I have never told it, that's for sure. I always just wrote something like "invested around 100G into Thelnia's business". I never gave any information about the invested material or how do I expect to turn it into cash.

You believed me, maybe because you liked my style. Maybe because you trust in people in general. Maybe because you saw no reason for me to lie. Has it ever crossed your mind that while I am honest, I can be wrong?! I may really believe that the best business in the world is buying almost-epic hammers and sell them for new Death Knights. But my honesty does not save me from ending up bankrupt if my plan is stupid. Nor it saves you if you follow me blindly.

The reason why the bank sector collapsed in the boring world where one only can play human is exactly the same. Nobody, ever asked what the hell the bankers and brokers do with the money. And it's not just "money". It's your money. The bankers don't start their business by farming copper ore and peacebloom like Gevlon. They collect deposits. It means they ask you to give them your money, promising that they will give it back with interest.

The reason why governments are forced to save the banks with billions of dollars and euros is not some evil plot or politicians being bribed. The reason is simple: the banks lost the money of their depositors. They wasted your money! Your government is saving you, not them. If they wouldn't save the banks, you could not withdraw your deposits, you couldn't use your credit card, you could kiss goodbye to your pension fund or your child's university fund.

How could it be so easy for them? Because nobody asked them "how are you planning to repay my money with interest, considering that you also have expenses like salaries of employees and rent of offices besides your own profit"? And not only you did not asked them. They did not asked each other too! The bankers are not evil (if you doubt, kill a dozen, none of them will drop mark of sargeras). They honestly believed that their creative (twisted and stupid) papers made of stocks of each other and accounts of sub-prime loaners worth more than toilet paper.

They could believe it because:
Correction: not everyone believed them, Warren Buffet explicitly forbid his employees to buy any of these papers. He was playing with his own money, so he was motivated to think.

It did not take a genius to point out that these papers are worthless. The sub-prime loaners could no way repay their debts. Most of them did not have jobs or possession of substantial value. Only a fool would give them loan. If any of them had walked to you on the street, asking for $10000 loan with the promise that he will repay it with interest you would say "lol, an IRL 1G plz noob". Yet you did nothing to stop your bank from giving your money to the same noob!

The sub-prime papers were not the only "creative" ones that the banks bought. They bought stocks of each other (of course since all of them were in the same trouble, their stocks are equally worthless). They also invested in blind gambling chips about medium term oil price changes and such. Would you put all your pension money on the bet that the oil price will be below $80 in November? I'm sure you wouldn't. But still, you may do, and don't even know about it.

Hi. I read your Epic Wipe thoughts with great interest. Here's another take on the massive financial crisis from my WoW Blog, The Sacred and Profane:

You just got a new fan.